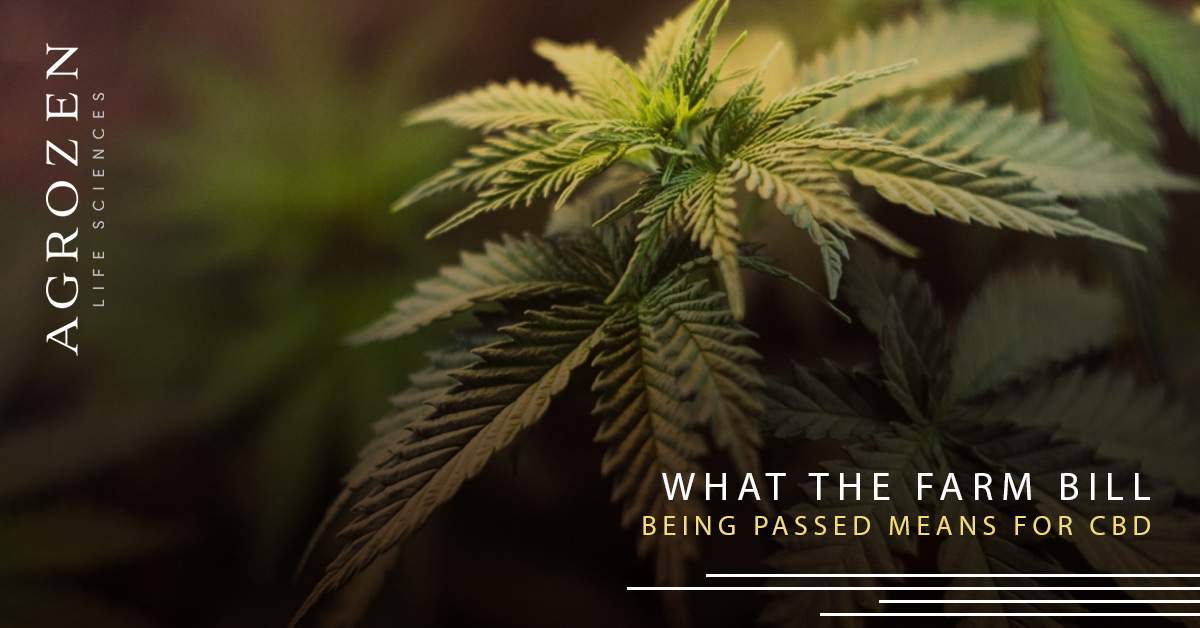 What The Farm Bill Being Passed Means For CBD

In the final weeks of the year, the Agriculture Act of 2018 (popularly known as the 2018 Farm Bill) was passed and put into law. Among the many other provisions set forth in the new bill, the biggest reformation included is the legalization of the cultivation and sale of hemp at the federal level, effective Jan. 1, 2019. This not only will lead to great improvements and possibilities for American farmers, but it also opens the door to a new, booming industry of hemp-derived products containing cannabidiol, or CBD.

About the Farm Bill and Hemp

Hemp Farmers Now Have The Same Rights As Other Farmers

Under the new 2018 Farm Bill, hemp is treated as an agricultural commodity in many ways. While there still may be provisions that heavily regulate hemp ensuring it is grown, extracted, and sold with a low THC concentration — hemp will now be a mainstream crop. Since hemp is capable of being grown quickly and in a variety of geographical regions, it’s likely to become one of the staple crops of the U.S. economy sooner rather than later. Hemp farmers are also now protected under the Federal Crop Insurance Act, meaning that those who face crop termination or losses due to climate changes will be protected from their potential financial losses.

Is Mitch McConnell The CBD King?

Many advocates for the industry of CBD oil products applaud Senate Majority Leader Mitch McConnell for his stewardship of these provisions to hemp legality in the Farm Bill. It is true that without his position and efforts, the reformation of hemp laws would not have found their way into the legislation initially. It’s also true that he took it a step further by appointing himself to the conference committee in order to bring the House and Senate to an agreement on the final version of the bill.

McConnell understood a great deal about the issue. For starters, he is well aware of the fact that CBD is non-psychoactive, meaning it doesn’t get you “high” in the manner cannabis is known for. He also understood that the drug war debate that banned marijuana and swept hemp up along with it was politically motivated, rather than policy-oriented. That being said, his motivations weren’t necessarily free from political prowess.

Hailing from Kentucky, one of the best places to grow hemp in the entire world (which it was prior to the prohibition), McConnell knew that if he stood a chance to be re-elected in his role as Senate Majority Leader, he would have to start a movement — one that would unite his home state, as well as a vast majority of the country, behind him. From this series of events and the passing of the Farm Bill, a hemp hero was born.

Based simply on the rising demand for these CBD-rich hemp oil products, it’s posed to be a one billion dollar industry by the end of 2019; thanks to the passing of the new Farm Bill, this number will likely be tripled. This is because more and more CBD shops and wholesale companies will continue to enter into the market now that there is no need to deal with importing industrial hemp in order to produce hemp oil products.

Now that the Farm Bill is fully in effect, you can order CBD oil products online (as you could before), but with the peace of mind that you are also supporting American jobs of both hemp farmers and CBD oil product manufacturers alike. On top of this, you will also see hemp be reintroduced for a variety of industrial purposes, as it was for centuries prior to its prohibition. From fabrics and textiles to insulation, construction, and even auto parts, hemp will quickly become the most versatile crop and material in the country.

The types of hemp-derived products containing CBD that enter into the market will also continue to diversify, as some will be classified as pharmaceuticals while others will branch further into the industries of beauty, skincare, supplement, food and beverage, and a variety of others. The possibilities are truly endless when it comes to the future of CBD and hemp oil products.